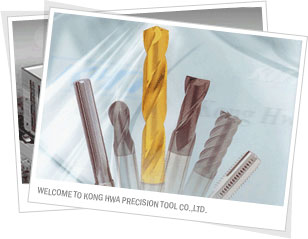 Our company has begun as retailer to sell imported cutting tools and various kinds tool in 1970.
With the rapid cutting tools market growth in Korea in 1980s.
However, Korean cutting tools market depends on imported tools by early of 1990s.
We established Kong Hwa Precision Tool for manufacture and distribution for localization in June. 1990. and we have long been developing for innovative tools.

It was the first time that we produced SPD (High performance drill) in Korea.
We have several agency in Domestic market and we are supplier to GM-Daewoo Motors since 2004.
Our tools are exported to Japan, China, Israel and so on since 2005. and our export surpassed 20% in 2006.
Our developed production Indexable type drill is increased to sell in the world after good reputation.
We look forward to your continued encouragement.
We will meet your satisfaction with constantly development and automatic facilities.